Last week I received an email touting the great benefits of a new kind of web advertising for eBay auctions, called “Auction Ads”. The email stated that just for signing up I’d get a bonus of $5 put into my account within two business days. Well four days passed with nothing, so I emailed them. They responded by saying it takes a week for the money to show up on my account. It has now been about a week and two days. I’ve given them over 24,000 ad views and they’ve given me nothing.

My advice: don’t waste your time with auction ads.

With a wide spread of PVR adoption comes a new form of “subliminal advertising”. Ads that last only 1 frame (that’s 1/24th of a second) probably aren’t able to influence viewers even subliminally, however, the following McDonald’s ad works because it is noticeable enough that someone watching on TV might pause, rewind, see the ad and then talk about it or better yet, post it on YouTube and create an instant viral ad.

I really like this animation that Honda used to announce their new diesel engines last year. Grrr, created by Weiden + Kennedy for Honda, is an animated 90-second film. Garrison Keiller sings a song with the lyrics ‘Hate something, change something, make something better’, and a new, silent and clean diesel engine is created. The ad ends with the flowers and trees forming the Honda logo and the words “Diesel i-CTDi”, and the screen fades to white and Honda’s “The Power of Dreams” tagline appears.

I like the combination of new media skills that were used to create this interesting Toyota commercial. Back in New York City for post production, the most interesting challenge was to design the type. We ended up designing just one custom-made alphabet for all the cars, but made all sorts of letter-like shapes for everything else. We made fun letters looking like buildings, trees, clouds, leaves and birds. We made letters carved into a cliff, and a flock of sheep forming a sentence. None of it could have been achieved with off-the-shelf fonts.
After watching the video, take a second to go back and pan through the video to see all the creative font placements.

It’s not as memorable as their 1984 ad, but it’s still interesting—First iPod Television Ad:

A new kind of interactive advertising allows consumers to plug their headphones into posters to get a short music sample. So if you’re mp3 playlist doesn’t happen to be doing it for you, you can check out what’s playing on the nearby posters. Right now they are promoting their Pepsi Access website. Seems like there is a lot of potential here—taking it one step further it would be a creative and extremely clever idea if the advertising firm teamed up with Apple and had an interface that you could, “park” your iPod on and download movie trailers, tv ads, or other advertising media that geeky consumers won’t be able to resist. 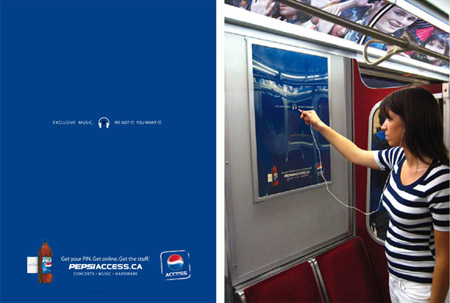 BBDO created a subway poster that has a fully functional headphone jack imbedded in it, which plays samples of various exclusive tracks available at pepsiaccess.ca. There are close to 100 posters playing 12 different tracks running in Toronto and Vancouver from now until the end of summer.

Pepsi’s got the right idea here. It seems to me to be a lot smarter than the Coke ads that continually scream “GOAAAAAAAAAAL” in celebration of the World Cup. I haven’t actually heard one of these myself but World Cup fan or not, it seems like it would get irritating pretty quickly.

Wired has an intriguing article on the state of online advertising and the use of click spam to defraud advertisers.

Pay-per-click is the fastest-growing segment of all advertising, reports the Interactive Advertising Bureau. Last year, Yahoo! alone ran more than 250 million individual listings, according to Michael Egan, the company’s search-marketing director of content strategy. Yahoo! doesn’t break out PPC earnings separately in its financial statements, but Goldman Sachs analyst Anthony Noto believes that keyword advertising accounted for about half of the company’s estimated $3.7 billion in revenue for 2005. PPC is even more lucrative for Google. According to Noto, Google will end 2005 with $6.1 billion in revenue. About 99 percent of that revenue comes from keyword ads (over 56 percent from AdWords, according to the company’s most recent quarterly financial statement, and 43 percent from AdSense), making Google a bigger recipient of ad dollars than any television network or newspaper chain. All of which is to say that little blue text links, a type of advertising that barely existed five years ago, are poised to become the single most important form of marketing in the US — unless click fraud ruins it. 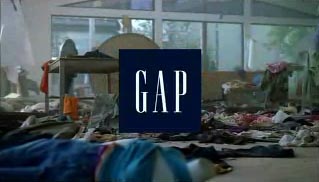 Last week Slate’s Seth Stevenson published an article about Spike Jonze’s “Pardon Our Dust” Gap ad. There are two versions of this ad — the much cooler Jonze-approved version that I found on the internet and which never played on TV, and the totally gutless Gap-marketing-execs approved version, (linked in the Slate article) which uses a musical cut called “Don’t Stand Still” instead of Edvard Grieg’s “In the Hall of the Mountain King,” the mischievous scoring from Ibsen’s “Peer Gynt” that Jonze used.

Stevenson explains that a Gap spokesperson claimed to have “tried several variations” of the ad, settling on the one they thought worked best. But it causes me to wonder, did The Gap not use Jonze’s version because they thought it was too much on its own wavelength? Perhaps it just plain scared them.

Admittedly, Jonze’s version doesn’t really deal with, much less convey excitement about, the idea of a forthcoming renovation of the Gap stores. What it does is comically express a fierce loathing of the Gap brand and, as some have suggested, a distain for all corporate chain stores everywhere.

However, Stevenson feels that “what the company needs is a piece of marketing that suggests radical changes are afoot — that the Gap brand is about to tear itself down to its foundations and be reborn.” He boldly wonders, “Did Gap not see the possibilities? Were they too scared to go for broke?” The answer is that Gap executives saw exactly what the ad portrayed and consequently squashed it’s distribution. They aren’t ready for a complete brand restructuring — which this ad would have been perfect for. With that in mind please enjoy the internet leaked and Spike Jonze approved, Director’s cut Gap Ad.

Recently Ponyboy at Glassdog.com gave a fairly scathing rant about BoingBoing’s slippery slope decent from sans ads to (depending on what you consider an ad) “between nine and nineteen ad slots”. He complains that BoingBoing has sold out while at the same time it continues to pretend nothing has changed.

I can’t really compare myself with BoingBoing in influence or blog credibility (if there is such a thing) but I feel like I can totally relate. For years I’ve had a pretty big draw in my Stairway to Heaven Backwards site, but I’ve always resisted putting ads on it. I felt that it would be selling out. But the thought persisted. Perhaps I even used BoingBoing as my role model. If they can do it, I justified, then so can I. It didn’t take long until I convinced myself that a few context sensitive ads wouldn’t actually hurt that much anyway. Besides I would only be collecting money to help pay for the site.

And that’s great for the time being. Right now I can justify the ads by telling myself they are here for the greater good of keeping the site alive. However when I finally raise enough money to pay for hosting and DNS costs, I have to admit that I won’t want to take the ads down. It’s just too easy not to.

I think BoingBoing is in the same boat. They started out with the best of intentions; they really believed that their ads were only there to cover costs; they really believed that they were a necessary evil in their fight for survival. But once the ads were up they realized that hey, tasteful advertisments on a site are not the worst thing in the world. In fact maybe they are even setting an example of how the websites can survive and even generate money after dot com bubble burst.

Put yourself in the publishers place. Money is tight and yet you must find away to make ends meet. After some agonizing you realize that ads on your site are the best route to take but you feel like you have to sell your soul in the process. You close your eyes and take the plunge but then when the dust settles you realize advertising is not so bad. You still have that strong justification that “it’s all for the greater good” running through you head. Then the day comes that everything is paid for, the site has become self sufficient and you can rest easy knowing your baby is safe. But the money continues to roll in. It’s at this point that something inside you changes. Your very soul turns around and says, “Hey this extra cash will allow me to finally get that BowFlex (TM) I’ve seen on late night TV.”

I have to agree with Ponyboy that BoingBoing probably should admit to themselves the real reason the ads are there to stay. It has caused me to reevaluate my thoughts on the subject and I’ve realized that the writers of BoingBoing, like me, know that when all is said and done – after 90 days on our new excisise equipment will mean bodies that are sculpted to perfection.